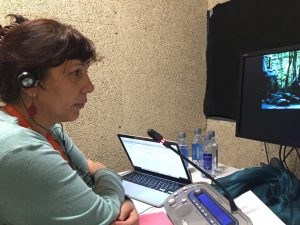 When I was first asked, more than 25 years ago, if I wanted to work for the Zinemaldia translating interviews and even doing simultaneous interpreting I had to say yes. True, I hardly had any experience in the profession, but my excitement at having a chance to take part in such an emblematic event and the kind of rates I was going to get paid, astronomical for the single mother and part-time teacher I was then, drove me to overcome the extreme fear that I immediately felt that I might not do a perfect job.

Many such festivals have gone by and I can certainly say that I feel more than satisfied with the result: I have met some very famous actors, usually exuding a sort of enchanting charisma that attracts you like a magnet; and some not so well-known directors and members of filming crews whose intelligence and sensitivity have really touched me deeply, and showed me the importance of those working behind the scenes.

I have also dealt with the up-and-coming hopefuls in the industry through the very interesting international meetings of cinema schools taking place in Tabakalera. The short film competition that is at the centre of this section of the Festival has convinced me that there is a lot of cinematic talent out there. Unfortunately, only a few will be able to make a living out of theirs! but here these exceptional young people all come year after year, eager to learn and share experiences, full of ideas, expectations and dreams.

On my part, I have to say that there has been the occasional slip and blunder, especially at the beginning, but also incredibly uplifting moments of congratulations and thanks for a job well done. However, it is not credit I would claim entirely for myself, for this is a job where you really appreciate the help, confidence and support that you receive from the colleagues you share the translation booth with, without whom I would have given up this challenge years ago.

So, yes, the time for the 65th edition of our city’s most prominent cultural event is about to start once again, and once again I will be proud to say I took part in it and did my best to make it a success. Until then, throughout this week, I will be here, at Bee My Guest, teaching, organising timetables and taking your registration for the new academic year, officially starting in October.

By then Donostia will be back to normal, having said good bye to the summer tourists and hello to the autumn, with its beautiful colours and light; but also with the memories that this year’s glamorous visitors will have left in our retinas and in our hearts.

See you at the cinema!